At last it is tolerably certain that Signor Ermete Novelli, Italy’s foremost actor, will be seen this season in New York, Boston and Philadelphia. On several occasions the coming of this great actor has been announced, then for reasons unexplained to the public, his visit was suddenly postponed. It is now announced that he will positively appear here in March under the direction of the Shuberts. At present writing, the tragedian is acting in the city of Mexico, but as he is compelled to be in New York in March in order to appear in a law suit brought by him against an American firm of theatre managers whom he alleges broke their contract with him, it was an easy matter to arrange with the Shuberts for a series of performances. There is considerable curiosity among American theatregoers to see this actor of whom so much has been heard. It will be his first visit to the United States, although he is well-known in almost every other country. Novelli is now in the prime of his career. He resembles Coquelin in intellectual subtlety of characterization, no less than in certain distinctively natural methods of his art. In Italy he has been the foremost champion of the modern natural school of acting, of which with his marvelous mobility of features, range of vocal expression, ease of gesture and straight simplicity of style he is to-day one of the best living exponents. He first made his reputation in the line of comic jeune premiers. This seemed manifest destiny, with the big-nosed comedy and it was not long before his active mind reached out for the world’s dramatic masterpieces. His repertoire to-day is the most varied of any actor’s in the world, ranging from the Œdipus Rex of Sophocles and Hamlet to the modern French farces. Below will be found a study of Novelli in his greatest rôles written for the Theatre Magazine by Benjamin de Casseres, a New York journalist now living in the city of Mexico.

SIGNOR NOVELLI’S conception of Shylock is absolutely original. Booth made of Shylock a melancholy wandering Jew. Mansfield makes of him a demon of hatred. Novelli only among all the actors who have tried this difficult rôle has brought to the surface in stark nakedness the subtlety of the Jew of Venice, subtlety that is more than the subtlety of an individual robbed of his ducats and his daughter in that it mirrors the cunning, the subterranean hate, the watch-and-ward of a degraded, wronged people. The study is atomic. Novelli’s gestures are the minutiæ of a soul. The face is now a mask for calculated stupidity, now a dumb show of volcanic emotions; the eyes robbed of their lights by a thought that sits heavy upon his inquiet soul, then suddenly transversed by mockery, triumph, unspeakable irony—the great round pupils becoming two grimacing devils from hell; his postures slavish, kingly, obsequious, as flexible as his desires, crooked to the angle of his needs, a gymnast of expectations, an insinuating worm, a twisted, broken father chased by the dirty urchins of Venice—thus has Novelli followed Hamlet’s injunction of “suiting the action to the word,” giving to us, through the wonder of his art, a creature whose vengeful wickedness, unmerited sufferings and demoniacal furiousness have their tracks in the memory from act to act and long after the final curtain.

In the first act, in the scene on the Rialto with Bassanio and Antonio, Novelli’s reserve—the crouching reserve of the cat before it pounces on the mouse—is thrown upon the mind in clear relief by the manner in which he calls “Jessica! Jessica!” after Bassanio and Antonio have left him. He calls for his daughter sternly, deeply, where a moment before, in the presence of his two Christian customers, he had been all cunning, as full of wiles as a coquette, naïve, entrenched behind his rampart of Oriental-Italian diplomacy. Here it is in that first act that Novelli bodies forth the puzzling complexity of the Jew of Venice. Complex he is beyond all the other characters of Shakespeare, even more complex than Hamlet, of whom we always know his next act; but in the case of Shylock—at least in the shadowy but extraordinarily clear conception that Novelli has of him—we are always in doubt as to whether he really will take his pound of flesh. Shadowy, but clear—that is the Shylock of the first act, like a shadow cut clear against a blazing sunlight. In the trial scene—and here it is that the test of the intelligence of an actor who undertakes Shylock is made—Novelli’s reserve is admirable. Reserve! Reserve! that is the shibboleth of great acting. The absence of it mars Mansfield’s acting and the possession of it makes of Duse and Noveli supreme masters of their art. In the trial scene there is every temptation to overstep, every invitation to rant; but Novelli never “plays to the gallery.” He does not sharpen his knife to take his pound of flesh, as some actors have done, like a butcher about to hack a dead bull. Novelli’s eyes glitter like his blade, his teeth open like a cannibal’s about to eat a succulent babe: he sharpens the blade to the hidden movement of a dream—the dream of a fiend about to settle an old account. His face is the beatification of maliciousness, the triumphant apotheosis of spleen. And when the decision is rendered against him the swollen bladder bursts, the puffed spite of this money hawk crumbles to a slimy, groveling humility, and he vanishes from the scene after spitting out the word “Christian”—squirted the vitriol from a syringe—at those in the courtroom and leaves us wondering at the superb art of Novelli [68] and the transcendent dramatic instinct of William Shakespeare. Shakespeare conceived “Lear” in a bitter moment, and wrought it out on the lines of the great Greek masterpieces. Victor Hugo has said that “King Lear” is the excuse for Cordelia. “Shakespeare carried Cordelia in his thought, and created that tragedy like a god, who having an Aurora to put forward makes a world expressly for it.” This is one of Hugo’s exaggerations. Shakespeare wrote “King Lear” for the same purpose, conscious or unconscious that Æschylus wrote his “Prometheus,” or Sophocles the “Œdipus Rex,” or Byron his “Cain.” The mightiest dramas deal with the war between gods and mankind, the immemorial struggle of the human being with that unspiritual god of the universe, Circumstance. The great Unkowable God is blind. He holds the lightning in his hand, and we call it Law; he grinds the human being in the dust with a movement of His foot, and we call it Necessity. 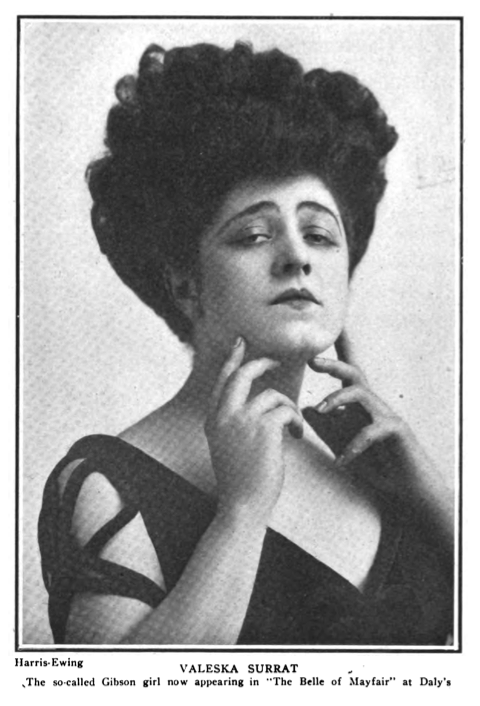 Valeska Surrat: The so-called Gibson girl now appearing in “The Belle of Mayfair” at Daly’s